In the wake of massive protests around the country in response to continued acts of racial violence and murder against individuals like George Floyd, Breonna Taylor, Ahmaud Arbery, and Tony McDade (among so many others), there's been a noticeable uptick in book sales about racism in America. At the time of this writing, the top four books on Amazon's bestseller list are White Fragility: Why It's So Hard for White People to Talk About Racism by Robin DiAngelo, So You Want to Talk About Race by Ijeoma Oluo, and the books How to Be an Antiracist and Stamped from the Beginning: The Definitive History of Racist Ideas in America, both by Ibram X. Kendi.

But given that you're on a technology company's website, I'd like to recommend some books specifically geared towards technologists interested in better understanding our shared privilege. For we are in a privileged space; generally speaking, we're well compensated, have a great deal of flexibility in our work, and have a lot of power within our organizations. Given these facts, it's important to understand that in many cases, technology plays a critical role in reinforcing bias and further marginalizing already marginalized groups. If we have any hope of dismantling racist systems, technology will have a huge role to play.

Here are a few books that have helped me understand the myriad problems with the systems technology has helped to create.

1. Programmed Inequality: How Britain Discarded Women Technologists and Lost Its Edge in Computing, by Marie Hicks.

While not directly relevant to American systems of oppression, this history of technology in Britain helps provide a historical context for why technology in general is so male-dominated today. 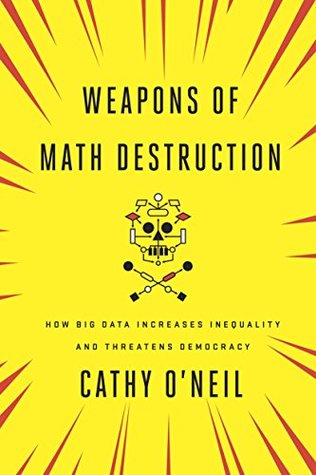 The title might seem hyperbolic until you read the book. The whole thing is basically a collection of big-data examples that highlight a truth articulated by Elie Wiesel: "Neutrality helps the oppressor, never the victim. Silence encourages the tormentor, never the tormented."

One of my biggest takeaways from the book is the problem of using proxies in algorithm design. For example, if you're a car insurance company, you want to to know the likelihood that a customer will be in an accident in the next year, so that you can charge the appropriate premium. But since you can't predict the future, you will use other information about the customer that is hopefully highly correlated with the likelihood they will be in an accident. These other pieces of information are proxies. And a lot of the time, they are terrible predictors, and may disproportionately hurt the poor. For example, if you used a person's credit score to determine their insurance premium, this may have little predictive power in terms of accident rates, but will penalize people who have poor credit.

In essance, as summarized by the author, for better or for worse (and often for worse), "Models are opinions embedded in mathematics." 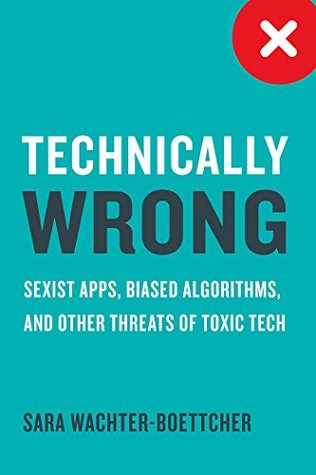 This book strikes a similar tone as Weapons of Math Destruction, but instead of focusing on problematic algorithm design, Wachter-Boettcher highlights a number of biases that emerge as the result of cultural homogeneity, or, for lack of a better word, incompetence. Here's a particularly egregious example:

One designer working on digital products in the Midwest told me she sat down with her company’s owners to talk about maternity leave and found out they didn’t even know whether they had a maternity policy. Even though the company had forty-odd employees and had been in business more than a decade, no staff member had ever been pregnant. In fact, only a handful of women had ever worked there at all. When she asked about establishing flex schedules and making work travel more predictable, she was shot down. “We have three other women of childbearing age on our team, and we don’t want to set a precedent,” the owner told her, as if pregnancy were some sort of new trend. She had to quit—and so did other women who got pregnant there after she left. So the company, which had said it wanted to hire more women, stayed just as male-dominated as ever. 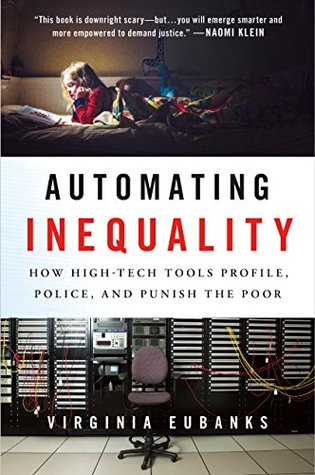 More than any other book on this list, Automatic Inequality clearly illustrates how migration from human systems to computerized systems can have an outsized negative impact on marginalized communities. Her core thesis (and warning) is as follows:

Automated decision-making shatters the social safety net, criminalizes the poor, intensifies discrimination, and compromises our deepest national values. It reframes shared social decisions about who we are and who we want to be as systems engineering problems. And while the most sweeping digital decision-making tools are tested in what could be called “low rights environments” where there are few expectations of political accountability and transparency, systems first designed for the poor will eventually be used on everyone.

There are plenty of other books as well. Some others that I'd like to read by haven't yet include Algorithms of Oppression: How Search Engines Reinforce Racism, by Safiya Umoja Noble, and The Ethical Algorithm: The Science of Socially Aware Algorithm Design, by Michael Kearns and Aaron Roth.

In closing, at the risk of stating the obvious, reading books is insufficient for the dismantling of racist systems. This quote from James Baldwin seems particularly relevant. In his book The Fire Next Time, when discussing the dramatic inequality he saw in Chicago in the early 1960s, he wrote:

This was the South Side - a million in captivity - stretching as far as the eye could see. And they didn't even read; depressed populations don't have the time or energy to spare. The affluent populations, which should have been their help, didn't, as far as could be discovered, read, either - they merely bought books and devoured them, but not in order to learn: in order to learn new attitudes.

As people of privilege, our attitudes mean very little if they do not lead to action. So while these books can help people in tech understand their own biases, reading them is in no way a replacement for direct action.

For folks working in tech, what other resources would you recommend reading? Please let us know!